Glen Canyon National Recreation Area is famous for Lake Powell, the second largest man-made lake in the country. The lake is a stunning maze of red canyons and shinning blue waters that bring in over 3 million visitors a year to the area. Explore by  boat or kayak, swim in the lake, or hike into the backcountry to get the solitary feel of Southern Utah. The picturesque twisted canyons and deep blue waters make it seem like you have transported to another planet, as if you are in an entirely separate world than the one of busy streets, pollution, and mundane worries. If you ever manage to draw yourself away from this desert paradise, check out these five other areas to explore.

Horseshoe Bend (10 minutes)
One of the single most photographed sections of the Colorado River is Horseshoe bend. A ‘U’ shaped turn in the river has carved a 1000 ft deep canyon, just seven miles north of the Grand Canyon proper. This breath-taking natural wonder is accessible through a short hike through sand to the edge of Horseshoe Bend.

Insider Tip: For all you photographers, check out their website. They have a guide of the difference in light at different times of the day.

Insider Tip: In for a big thrill but don’t have all day? Take a drive on Hell’s Backbone Scenic Route. The 38-mile loop travels along ridges and mountain contours providing stunning views and creating a show of changing landscapes. The highlight of the drive is Hell’s Backbone Bridge, a wooden bridge with dizzying drop offs on either side.

Vermilion Cliffs National Monument (1.5 hours)
The remote desert wonderland of Vermilion Cliffs National Monument holds more than just a few secret gems. But be warned; Vermilion Cliffs holds no RV hook-ups, air-conditioned visitor centers, or campgrounds complete with toilets. What draws tough-skinned explores to Vermilion? The type of isolation and self-reliance that only the crumbling towers of red cliffs and sand can grant. If you want to fall into the world of Edward Abbey’s Desert Solitaire, this is the place to do it. Despite being often overshadowed by it’s neighbors such as Bryce Canyon and Arches National Parks, it still holds one grand treasure that explores come from across the world for a chance at a permit. “The Wave” is a spectacular geological formation, that resembles of wave of orange, red, and white colored sand solidified.

Insider Tip: With permits being booked months (sometimes even years) in advance, a chance to hike the wave this summer is slim. Try Paria Canyon instead, or try your luck at the raffle every morning in BLM office in Kanab, Utah.

Grand Canyon National Park, North Rim (1.75 hours)
The Grand Canyon is so immense that it is almost impossible to take in all at once. The Grand Canyon National Park actually has two different sections,the North and South Rims, only connected by a strenuous backpacking trail. While the South Rim is the more visited side, the North Rim offers all the views, but with a more alpine environment. Huge cottonwoods tower over visitors as they hike to the edge of the mile-deep canyon, and stunning views across the canyon, as well as down, await. The rocks at the bottom of the canyon are some of the oldest on earth, dating back to the Precambrian Era.

Insider Tip: Many visitors opt for the paved trails like Cape Royal or Walhalla Overlook. While these trails are not to be missed, don’t overlook the Ken Patrick trail. Wind through the much-less travelled forest trail, to a beautiful overlook for lunch.

Rainbow Bridge National Monument (3 hours by boat)
Rainbow Bridge National Monument holds one of the world’s largest natural bridges. Considered sacred to many different Native American Tribes, this natural wonder is not nearly as explored as the bridges in Arches, but easily accessible while visiting Lake Powell. Located west of Dangling Rope Marina (Lake Powell), the trailhead for Rainbow Bridge is found at a docking area in the back of Forbidding Canyon. At high water the lake extends right up under Rainbow Bridge, but normally the water ends 1-2 miles below. An easy trail extends from the docks to the bridge.

Insider Tip: You can still hike overland to the bridge, if you don’t mind spending 3-4 days on the trail. The trail is on Navajo Nation land and requires a permit from the tribe. 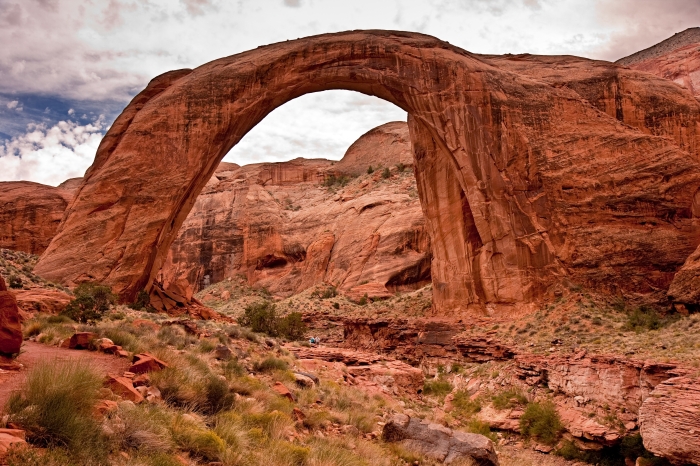 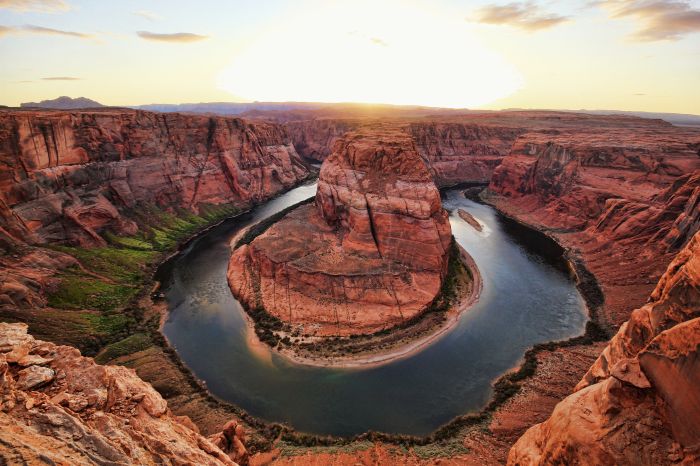